My View of The Term, Native American Flute


Pueblo Peoples of the Southwest have been using flutes ceremonially for hundreds of years, to conjure up rain spirits, clouds, and anything related to good crop growth. Most of these flutes were rim-blown, and some were bone flutes or whistles with a few holes. These flutes have been recently called "Anasazi" flutes, but I call them Pueblo-style rim-blown Flutes, or Pueblo Flutes. Not much is known by the public about how Pueblo Flutes were/are played by Pueblo Peoples due to the secretive nature of our lifestyle and beliefs; however, they are still used in modern Pueblos.

My first example is a Zuni Pueblo Dance Flute (Image source: Objects of Myth and Memory: American Indian Art at the Brooklyn Museum). The decorations of this flute are quite simple yet beautiful: a decorated gourd attachment on one end with eagle plumes tied on the rim, and evergreen branches bound in the center where the dancer would have held this flute while dancing.
The second is a five-holed Hopi Flute from the Boston Museum of Fine Art. The third is a four-holed flute from San Felipe Pueblo "collected" by a man named Spinden, in the early 1900s. The forth is a four-hole flute from Cochiti Pueblo with fragments of a gourd attachment (American Museum of Natural History). The fifth flute is a four-holed flute "collected " by Stuart Culin in 1907 whilst visiting Jemez Pueblo (Image source: Objects of Myth and Memory: American Indian Art at the Brooklyn Museum). It appears to be made out of a type of reed. It would have also had a gourd attachment on the bottom like the Zuni and Cochiti flutes. The gourd attachment represents a rain cloud with the eagle plumes representing rain. These Jemez and Zuni Flutes are now stored in the Brooklyn Museum of Fine Art. There are also some historic Pueblo Flutes that are put up for auction, like this Kewa Pueblo Flute. It was on auction at COWAN'S, a consignment auctioneer.
Pueblo People have historically used bone flutes as well. The image below is from an excavation of an old Jemez Village located in the Jemez Mountains, called "Unshagi", place of the Juniper trees. Other similar flutes have been found at other sites throughout the Southwest. 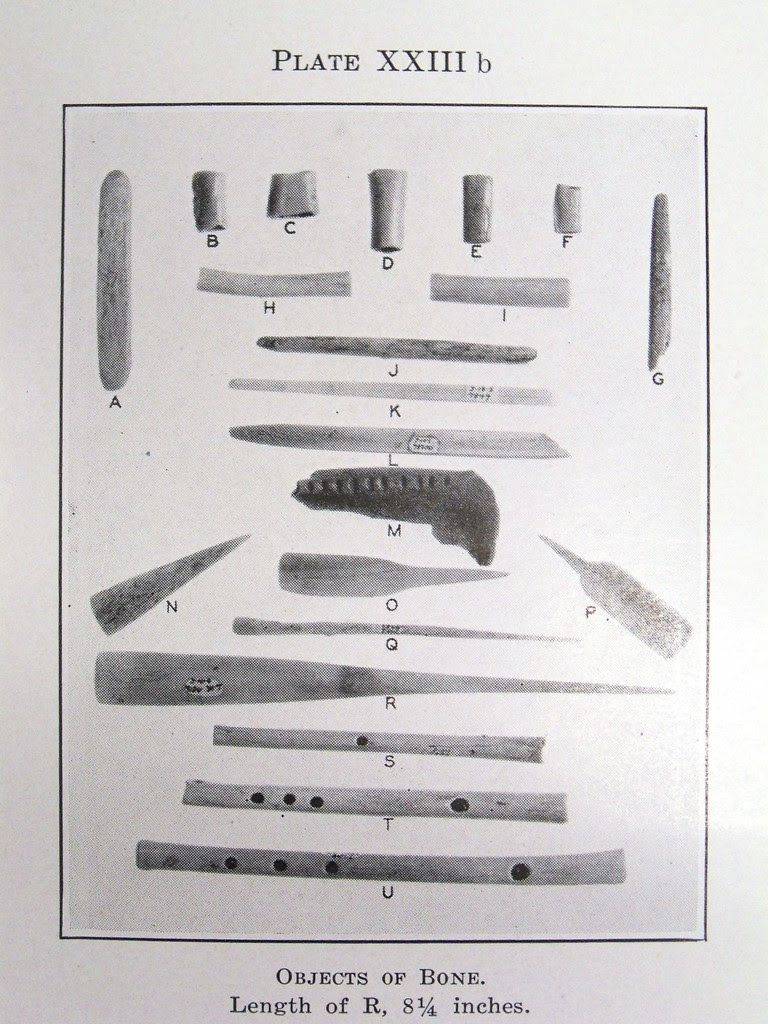 Bone artifacts from excavated Jemez ruin of "Unshagi". Image from The Jemez Pueblo of Unshagi, New Mexico, with Notes on the Earlier Excavations at "Amoxiumqua" and Giusewa by Paul Reiter, University of New Mexico Press, 1938.

Some more flute history can be found at Flutopediaor Native Flutes Walking
Posted by Marlon Magdalena at 8:58 AM 1 comment:


This is a video that shows the eagle bone flutes that I made. They are made from an Immature Bald Eagle my dad received in December of 2012 from the National Eagle Repository in Denver Colorado. As a tribal member of a Federally recognized tribe, we can order eagles for religious purposes.

My interest in the bones came about from my interest in archaeology. There is an excavation report from 1938 of an ancestral Jemez Village caled "Unshagi" in the mountains, and many bones artifacts were unearthed. A few of those artifacts were bone flutes (Pl. XXIII b).

I wanted to recreate the flutes, and luckily, my dad had the eagle. The bones I used were from the wings. They're called ulna bones. I cut off the ends of the bones to make a tube, then I drilled holes in the approximate locations according to the image of the flutes. The 3 holes closed together are the finger holes and the one further away is where the sound is made. I used my own Piñon pitch glue to make the sound airway. I made my own Piñon pitch glue by mixing and melting sap from the Piñon tree with charcoal. As the glue was a little warm and malleable, I made it into a small ball and inserted in to the bone. I then heated the area where the sound hole was and shaped the glue with long skinny sticks until I got a sound. The end results were amazing.

I cannot sell these flutes, because they are made from Eagle parts and it is illegal to sell, trade, or barter. But, I can sell or trade for services to make an eagle bone flute for someone who has any legally obtained eagle bones. I have found other ways to make these types of bone flutes, but instead of using eagle bones, I use Turkey bones (from The Game Changer Taxidermy). Other large birds, like ducks and geese, will do as well, because most birds have hollow bones. I also use copper tubing and bamboo.

I have plans to make more of these flutes. I ordered my own eagle at the beginning of this year. I ordered a whole eagle and will take from 3 to 5 years for a whole eagle. Golden Eagles take longer to receive, and Bald Eagles are quicker to receive. My dad received his Bald Eagle within 1 and a half years. So, I am hoping mine doesn't take as long.
Posted by Marlon Magdalena at 9:25 AM 5 comments:

Jemez Black on White Pottery, a revival of ancient ways

Joshua Madalena has successfully revived an ancient type of pottery that had been lost for centuries; Jemez Black-on-White. He has done years and years of research to find the right recipe and has now become world renown for his Black-on-white pottery. He shows his work at art shows across the Southwest. Visit his website for more information about his work and view images of his past work.

Pueblo resident Joshua Madalena welcomes these voices as his guides on a singular quest: to revive the ancient art of black-on-white pottery that his people were forced to abandon more than 300 years ago. “Jemez is a very traditional pueblo,” says Madalena. “Ninetyfive percent of us speak Towa, the old language, and our connection to our culture is strong. The majority of the pottery made here is a fairly recent version, from the early 1900s. The black-on-white pottery of our ancestors was created between the 14th and late 17th centuries, but hasn't been made since...

Madalena’s mission to revive the lost art finally was realized in the summer of 2005, after he’d spent six years patiently researching through trial and error. According to Eric Blinman, an archaeologist with the Museum of New Mexico, Madalena’s is an achievement of major significance, similar to what Maria Martinez accomplished in the revival of Tewa polished black pottery. “Joshua Madalena has succeeded in replicating the Jemez black-on-white techniques,” affirms Blinman” SOURCE

Posted by Marlon Magdalena at 9:31 AM No comments:

Marlon Magdalena
Ælu'æki (Aluaki) means "Young Elk", and is my Jemez (Hay-mes) name. I am an Artist from the Pueblo of Jemez, an Indigenous Nation in Northern New Mexico. I am also a barefoot and minimalist runner.